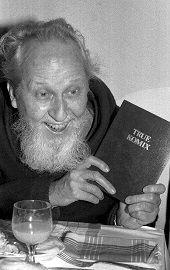 David Brandt Berg (February 18, 1919 – October 1, 1994), frequently known by the pseudonym Moses David, was the founder and leader of the new religious movement formerly called Children of God, now called The Family International. Berg founded this movement in 1968 among the counterculture youth in southern California. He came from a long line of non-conformist ministers and evangelists, so he also decided to spend his life dedicated to Christian service. Initially the group was filled with hippies and unchurched youth, but later drew in followers from many other places. This is when the Children of God expanded and became known as the Family International. To communicate with his followers, he began writing letters, and continued this practice for thirty years. His legacy has a lot of controversy, however, as he was accused several times for child abuse, and sexual misconduct even from his grandsons.