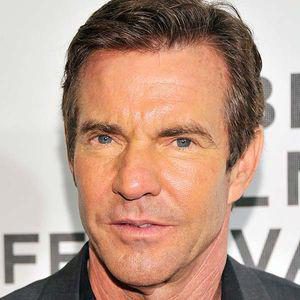 Dennis is alive and kicking and is currently 68 years old.
Please ignore rumors and hoaxes.
If you have any unfortunate news that this page should be update with, please let us know using this .

Does Dennis Quaid Have the coronavirus?

Dennis William Quaid is an American actor known for a wide variety of dramatic and comedic roles. First gaining widespread attention in the 1980s, his career rebounded in the 1990s after he overcame an addiction to drugs and an eating disorder. Some of his notable credits include Breaking Away, The Right Stuff, Wyatt Earp, The Rookie, The Day After Tomorrow, Traffic, Vantage Point, Footloose, Frequency, The Parent Trap, Yours Mine and Ours and Soul Surfer. For his role in Far from Heaven he won the New York Film Critics Circle Award for Best Supporting Actor, the Chicago Film Critics Association Award for Best Supporting Actor, the Online Film Critics Society Award for Best Supporting Actor and the Independent Spirit Award for Best Supporting Male.
Quaid and his first wife, actress P. J. Soles, were married on November 25, 1978. The couple divorced in 1983. On February 14, 1991, Quaid married actress Meg Ryan. Quaid and Ryan fell in love during the shooting of their second film together, D.O.A. Quaid and Ryan have a son, Jack Henry (born April 24, 1992). Quaid and Ryan announced their separation on June 28, 2000, saying they had been separated six weeks by then. Their divorce was finalized July 16, 2001.

Quaid dated model Shanna Moakler in 2001. The relationship lasted for eight months. Quaid married Texas real-estate agent Kimberly Buffington, on July 4, 2004, at his ranch in Paradise Valley, Montana. They have fraternal twins, Thomas Boone and Zoe Grace, born via a surrogate on November 8, 2007, in Santa Monica, California.
Buffington filed for divorce from Quaid in March 2012. Buffington's attorney then withdrew the divorce papers on April 26, 2012. In the summer of 2012, Quaid and Buffington moved to California. In October 2012, Quaid and Buffington again decided to separate, and Buffington filed for legal separation, seeking joint legal and sole physical custody of the twins. After waiting to establish the required six months of residency in California, Quaid filed for divorce on November 30, 2012, asking for joint legal and physical custody of the children and offering to pay spousal support to Buffington. They then reconciled and the divorce was dismissed by September 2013. On June 28, 2016, the couple announced in a joint statement that they were divorcing, with Kimberly Quaid asking for full physical custody and joint legal custody. The divorce was finalized April 27, 2018.