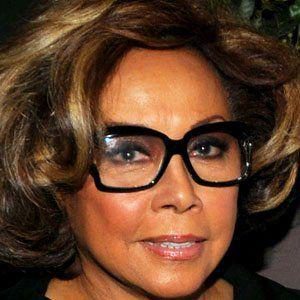 Carol passed away on October 4, 2019 at the age of 84 in Los Angeles, California, USA. Carol's cause of death was breast cancer.

Diahann Carroll is an American television and stage actress and singer. Her acting career has spanned nearly six decades. After appearing in some of the earliest major studio films to feature black casts such as Carmen Jones and Porgy and Bess (1959) and on Broadway, she starred in Julia (1968), one of the first series on American television to star a black woman in a non-stereotypical role. Later she played the role of Dominique Deveraux on the popular prime time soap opera, Dynasty. She is the recipient of numerous stage and screen awards and nominations. Carroll has been married four times and became the mother of a daughter in 1960. She is a breast cancer survivor and activist. Carroll was scheduled to return to the Broadway stage in the 2014 revival of A Raisin in the Sun as Mama, but withdrew prior to opening citing the demands of the rehearsal and performance schedule.
Carroll was married four times. Her father boycotted the ceremony for her first wedding, to record producer Monte Kay in 1956, which was presided over by Adam Clayton Powell Jr. at the Abyssinian Baptist Church in Harlem. The marriage ended in 1962. The union produced a daughter, Suzanne Kay Bamford (born September 9, 1960), who became a journalist and screenwriter.

In 1959, Carroll began a nine-year affair with the married actor Sidney Poitier. She said Poitier persuaded her to divorce her husband and said he would leave his wife to be with her. When Carroll got her divorce, Poitier did not keep up his end of the bargain. Eventually he divorced his wife. According to Poitier, their relationship ended because he requested to live with Carroll for six months without her daughter present so he would not be "jumping from one marriage straight into another." She refused.
Carroll dated and was engaged to British television host and producer David Frost from 1970 until 1973. In 1973, Carroll surprised the press by marrying Las Vegas boutique owner Fred Glusman. After four months of marriage Glusman filed for divorce in June 1973. Carroll filed a response, but did not contest the divorce, which was finalized two months later. Glusman was reportedly physically abusive.
On May 25, 1975, Carroll then aged 39, married Robert DeLeon, 24-year old managing editor of Jet magazine. They met when DeLeon assigned himself to a cover story on Carroll about her 1975 Oscar nomination for Claudine. DeLeon had a child from a previous marriage. Carroll moved to Chicago where Jet was headquartered, but DeLeon soon quit his job so the couple relocated to Oakland.
Carroll was widowed two years later when DeLeon was killed in a car crash. Carroll's fourth marriage was to singer Vic Damone in 1987. The union, which Carroll admitted was turbulent, had a legal separation in 1991, reconciliation, and divorce in 1996.