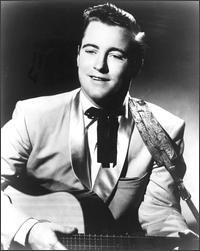 Dorsey passed away on August 19, 1979 at the age of 46 in Canoga Park, California, USA. Dorsey's cause of death was massive coronary.

Dorsey Burnette (December 28, 1932 – August 19, 1979) was an American early rockabilly singer. With his younger brother, Johnny Burnette, and a friend named Paul Burlison, he was a founder member of The Rock and Roll Trio. He is also the father of country musician and Fleetwood Mac member Billy Burnette.