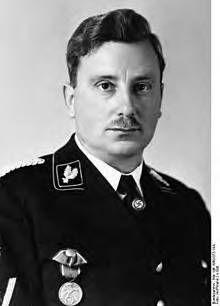 Emil Maurice (19 January 1897, Westermoor – 6 February 1972, Munich) was an early member of the National Socialist German Workers Party and a founding member of the SS. Together with Erich Kempka, he served as one of Hitler's personal chauffeurs. Unusually, he was one of the few mischlings (a person of mixed Jewish and ethnic German ancestry) to serve in the SS.