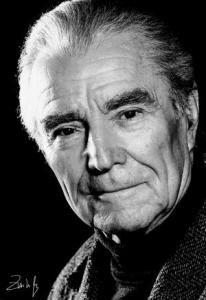 Ferenc Zenthe (born Ferenc Rameshofer; 20 April 1920. Salgóbánya – 30 July 2006, Budapest) was a Hungarian actor, honored with being chosen as an Actor of the Nation, the Kossuth Prize and the Meritorious Artist Award of Hungary. Best known from the historical series A Tenkes Kapitánya and pioneering soap opera Szomszédok, he was regarded as one of the great talents of his generation.