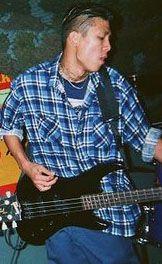 Franklin is alive and kicking.
Please ignore rumors and hoaxes.
If you have any unfortunate news that this page should be update with, please let us know using this .

Franklin Rhi is a bassist from the New York Hardcore scene. He has played in some of the most influential bands from the genre. He is best known for his time in Shelter. Prior to this he was in Crown of Thornz and 108. Sometime in the late 90's he relocated to Los Angeles and joined forces with some of the core members of Strife to form AngerMeans. They never materialised with anything, but when Strife reformed he played second guitar with them for a time. He has also played with John Joseph's version of the Cro-Mags and was part of a very early line-up in Bloodclot!