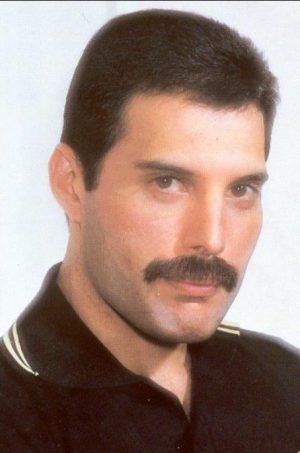 Freddie passed away on November 24, 1991 at the age of 45 in Kensington, London, England, UK. Freddie's cause of death was bronchial pneumonia resulting from aids.

Freddie Mercury was a British singer, songwriter and record producer, known as the lead vocalist and co-principal songwriter of the rock band Queen. He also became known for his flamboyant stage persona and four-octave vocal range. Mercury wrote and composed numerous hits for Queen; occasionally served as a producer and guest musician (piano or vocals) for other artists; and concurrently led a solo career while performing with Queen.
On 22 November 1991, Mercury called Queen's manager Jim Beach over to his Kensington home to discuss a public statement, which was released the following day:

"Following the enormous conjecture in the press over the last two weeks, I wish to confirm that I have been tested HIV positive and have AIDS. I felt it correct to keep this information private to date to protect the privacy of those around me. However, the time has come now for my friends and fans around the world to know the truth and I hope that everyone will join with me, my doctors and all those worldwide in the fight against this terrible disease. My privacy has always been very special to me and I am famous for my lack of interviews. Please understand this policy will continue."
On the evening of 24 November 1991, just over 24 hours after issuing that statement, Mercury died at the age of 45 at his home in Kensington. The official cause of death was bronchial pneumonia resulting from AIDS. Mercury's close friend, Dave Clark of the Dave Clark Five, had taken over the bedside vigil when he died. Austin phoned Mercury's parents and sister to break the news of his death, which reached newspaper and television crews by the early hours of 25 November.