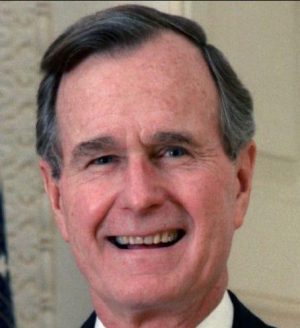 George passed away on November 30, 2018 at the age of 94 in Houston, Texas, USA. George's cause of death was vascular parkinsonism.

George Herbert Walker Bush is an American politician who served as the 41st President of the United States from 1989 to 1993, and the 43rd Vice President of the United States. A Republican, he previously served as a congressman, an ambassador, and Director of Central Intelligence. He is the oldest living former President and Vice President. He is also the last living former President who is a veteran of World War II. Bush is often referred to as "George H. W. Bush", "Bush 41", "Bush the Elder", or "George Bush Sr." to distinguish him from his son, former President George W. Bush. Prior to his son's presidency, he was known simply as George Bush or President Bush.
In 1991, The New York Times revealed that Bush was suffering from Graves' disease, a non-contagious thyroid condition that his wife Barbara also had.

On February 24, 2000, Bush was standing at a reception for 90 minutes when he felt lightheaded. He was admitted to a hospital with an irregular heartbeat. When Bush was released three days later, his doctors said that he had retained the irregularity in his heartbeat. On March 11, 2007, Bush fainted on a golf course and was admitted to the Eisenhower Medical Center in Rancho Mirage, California, but was released the following morning.
In July 2015, Bush suffered a severe neck injury. At age 91 in October that year, he was wearing a neck brace in his first public engagement since the accident when he threw the ceremonial first pitch for the Houston Astros at Minute Maid Park. Bush wrote a letter to president-elect Donald Trump in January 2017 to inform him that because of his poor health, he would not be able to attend Trump's inauguration on January 20; he gave him his best wishes. On January 18, he was admitted to the intensive care unit at Houston Methodist Hospital, where he was sedated for a procedure to treat an acute respiratory problem that was stemming from pneumonia. Three months later, he experienced a recurrence of pneumonia and was hospitalized.
On April 22, 2018, the day after his wife's funeral, the former president was hospitalized with a blood infection. The infection led to sepsis. One month later, he was briefly hospitalized again, after experiencing fatigue and low blood pressure.
Bush suffered from vascular parkinsonism, a form of Parkinson's disease that had forced him to use a motorized scooter or wheelchair since at least 2012. He died on November 30, 2018, aged 94, at his home in Houston. Tributes and condolences were offered by former Presidents Jimmy Carter, Bill Clinton, George W. Bush, and Barack Obama, and incumbent President Donald Trump. He will lie in state in the United States Capitol rotunda.