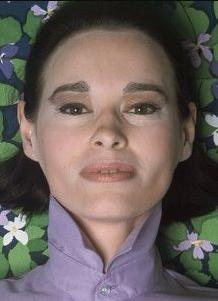 Gloria passed away on June 17, 2019 at the age of 95 in Manhattan, New York, United States. Gloria's cause of death was stomach cancer.

Gloria Laura Vanderbilt is an American artist, author, actress, heiress and socialite, noted as an early developer of designer blue jeans. She is a member of the Vanderbilt family of New York and the mother of CNN television anchor Anderson Cooper.
Vanderbilt studied acting at the Neighborhood Playhouse with teacher Sanford Meisner and studied art at the Art Students League of New York. She became known for her artwork, giving one-woman shows of oil paintings, watercolors, and pastels. This artwork was adapted and licensed, starting about 1968, by Hallmark Cards and by Bloomcraft (a textile manufacturer), and Vanderbilt began designing specifically for linens, pottery, and glassware.

During the 1970s, Vanderbilt ventured into the fashion business, first with Glentex, licensing her name for a line of scarves. In 1976, Indian designer Mohan Murjani's Murjani Corporation, proposed launching a line of designer jeans carrying Vanderbilt's signature embroidered on the back pocket, as well as her swan logo. Her jeans were more tightly fitted than other jeans of that time. The logo eventually appeared on dresses and perfumes, while Vanderbilt also launched a line of blouses, sheets, shoes, leather goods, liqueurs, and accessories. Vanderbilt was one of the first designers to make public appearances, which was a difficult thing for her because of her shyness.
On April 9, 2016, HBO premiered Nothing Left Unsaid: Gloria Vanderbilt & Anderson Cooper, a two-hour documentary, produced and directed by Liz Garbus, that featured a series of conversations between the mother and son, covering the mother's storied life and family history in the public eye.