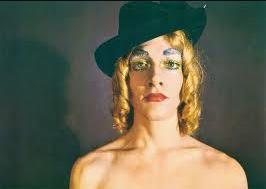 Goldie Glitters was a member of the notorious gender bending theatre troupe The c*ckettes, a San Francisco phenomenon of 1969-1972.