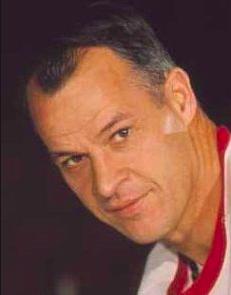 Gordie passed away on June 10, 2016 at the age of 88 in Sylvania, Ohio, USA. Gordie's cause of death was natural causes.

Gordon "Gordie" Howe, OC is a Canadian retired professional ice hockey player. From 1946 to 1980, Howe played twenty-six seasons in the National Hockey League and six seasons in the World Hockey Association (WHA); his first 25 seasons were spent with the Detroit Red Wings. Nicknamed "Mr. Hockey", Howe is considered one of the greatest hockey players of all time. A 23-time NHL All-Star, Howe held many of the sport's scoring records until they were broken in the 1990s by Wayne Gretzky. Howe continues to hold NHL records for most games and seasons played.