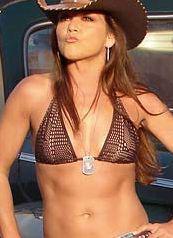 Gretchen is alive and kicking and is currently 49 years old.
Please ignore rumors and hoaxes.
If you have any unfortunate news that this page should be update with, please let us know using this .

Does Gretchen Wilson Have the coronavirus?

Gretchen Frances Wilson (born June 26, 1973) is an American country music artist. She made her debut in 2004 with the Grammy Award-winning single "Redneck Woman," a number-one hit on the Billboard country charts. The song served as the lead-off single of her debut album, Here for the Party. Wilson followed this album one year later with All Jacked Up, the title track of which became the highest-debuting single for a female country artist upon its 2005 release. A third album, One of the Boys, was released in 2007.