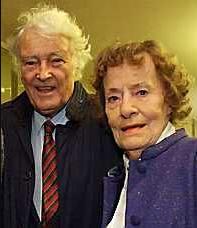 Norwegian actor who became well known as a presentor on Norway`s NRK Radio, known as "the man with the sung voice". In his 70s he suddenly became a cult-figure on TV when comedian Otto Jespersen gave him a small part in his popular show "O.J. ute på prøve" (O.J. Out On Parole). Each programme would see Rolfsen sitting in an arm-chair giving a cheerful speech, always starting with the catch-phrase "Hei, hei alle sammen, livet er herlig dere!" (Hello, hello everybody, life is beautiful!) He was married to Aud Schønemann, one of Norway`s most cherised female comedians for more than 50 years.