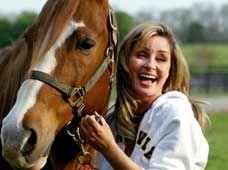 Janis is alive and kicking and is currently 68 years old.
Please ignore rumors and hoaxes.
If you have any unfortunate news that this page should be update with, please let us know using this .

Janis Oliver Gill was born as Janis Oliver. She is an actress, known for Maverick (1994), Hee Haw (1969) and The New Hollywood Squares (1986).
She was previously married to Vince Gill. They got married on 12 April 1980 and then got divorced on 30 June 1998. Janis Oliver filed for divorce in 1997, and numerous tabloid stories appeared, stating that Gill and Grant were having an affair and that this caused Janis Oliver to file for divorce.