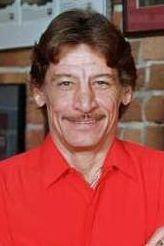 Jim passed away on February 10, 2000 at the age of 50 in Whitehouse, Tennessee, USA. Jim's cause of death was lung cancer.

James Albert "Jim" Varney, Jr. (June 15, 1949 – February 10, 2000) was an American actor, comedian, and writer best known for his role as Ernest P. Worrell, who was used in numerous television commercial campaigns and movies, giving him fame worldwide and for playing Jed Clampett in the 1993 movie version of The Beverly Hillbillies. He also provided the original voice of Slinky Dog in the first two Toy Story films.