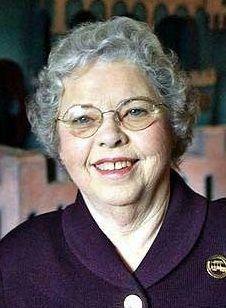 Joanne Rogers was born as Sara Joanne Byrd. She was previously married to Fred Rogers.
She recently reveals the way Fred Rogers proposed marriage. As Joanne Rogers, who was married to one of our most beloved children's television hosts of all time for 50 years, explained on TODAY Tuesday, Fred went the old-fashioned route: He asked her in writing.

So, about that marriage proposal? Well, Rogers met then-Sara Joanne Byrd when he studied at Rollins College in Florida, earning his degree in music composition in 1951. After graduation, he moved to New York for that 30 Rock producer's assistant job, but clearly he couldn't get her off his mind. "He wrote me a letter," she recalled. "My last year at Florida State, he wrote me a letter proposing marriage."
This was before "Mister Rogers' Neighborhood" got off the ground, but we like to imagine it included the phrase "won't you be ... my bride" in it! Fred and Joanne Rogers married on June 9, 1952 and had two sons, James and John. They remained together until his death in 2003 of stomach cancer.