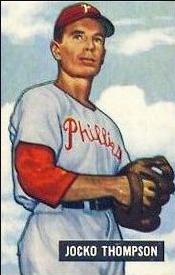 John Samuel "Jocko" Thompson (January 17, 1917 – February 3, 1988) was a professional baseball pitcher. He played all or part of four seasons for the Philadelphia Phillies of Major League Baseball from 1948 to 1951. He also served in the Army of the United States as a first lieutenant in the European theater during World War II. Thompson played in Major League Baseball during the Whiz Kids era during a career which spanned 12 seasons (1940–1941, 1946–1955). After attending Northeastern University, Thompson appeared as a situational pitcher and spot starter during the 1948, 1949, and 1950 seasons with the Phillies, and went 4–8 in his only season as a regular member of the team's starting rotation. After demotion to the minors in 1952, Thompson retired from baseball after the 1955 season.