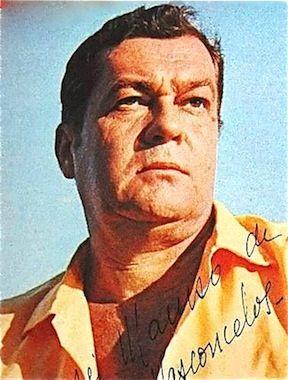 José Mauro de Vasconcelos (February 26, 1920 – July 24, 1984) was a Brazilian writer. The author had his original methods of writing. In the beginning, he would choose the scenarios where the characters would move. Then he would transfer to this place and do rigorous studies there. To write the novel Arara Vermelha, Mauro traveled 450 leagues (2,200 km; 1,400 mi) in the brute wilderness. Next, he builds the whole novel, determining even the dialogues. He had a memory that allowed him to remember every little detail of his imagined scenario for a long time. "When the story is entirely made in imagination", reveals the author, "is when I begin to write. I only work I have the impression that the novel is exiting from all the pores of the body."
Mauro relates that after finishing writing the first chapter, he passes to the conclusion of the novel, without even elaborating the plot. "That, he explains "because all the chapters are already produced mentally. It is not really important writing a sequence, like alternating the order. In the end everything goes well". Mauro was a cinema actor and worked in films such as Carteira Modelo 19, Fronteiras do Inferno, Floradas na Serra, Canto do Mar (of which he wrote the screenplay), Na Garganta do Diablo, and A Ilha. He won many prizes, such as the Saci prize for best supporting actor, the Saci prize for the best actor of the year, and the Governo do Estado prize for best actor of the year. His novels Arara Vermelha and Vazante were filmed.

Because it was written in plain language, the book My Sweet Orange Tree became a popular choice for primary schools in Brazil to adopt it in their curricula. It is claimed to be the book that sold the most in that country's literary history. In the first few months of its publication in 1968, this book has sold 217,000 copies. My Sweet Orange Tree has also been filmed as soap operas and movies in Brazil, including the 1970 film and the April 2013 re-make by director Marcos Bernstein.
After his death, José Mauro de Vasconcelos has given his name to numerous libraries and cultural association all over Brazil, including a library in the city of São Paulo.