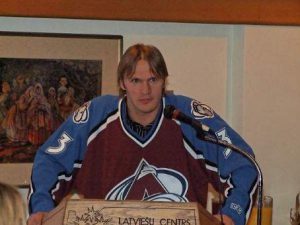 Kārlis Skrastiņš (July 9, 1974 – September 7, 2011) was a Latvian professional ice hockey player. Skrastins was a member of Lokomotiv Yaroslavl of the Kontinental Hockey League (KHL) and was on board the team plane which crashed on September 7, 2011. Skrastiņš played eleven seasons in the National Hockey League (NHL) before joining Lokomotiv in 2011.