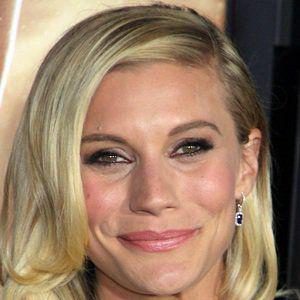 Kathryn is alive and kicking and is currently 42 years old.
Please ignore rumors and hoaxes.
If you have any unfortunate news that this page should be update with, please let us know using this .

Does Katee Sackhoff Have the coronavirus?

Katee Sackhoff's mother, Mary, is still alive and kicking at the age of 4.

Katee Sackhoff was born on April 8, 1980 in Portland, Oregon, USA as Kathryn Ann Sackhoff. She is an actress and producer, known for Battlestar Galactica (2004), Longmire (2012) and Oculus (2013).
Sackhoff's most widely known role is as Kara "Starbuck" Thrace in the miniseries and follow-up TV series Battlestar Galactica, for which she won a Saturn Award in 2006 for Best Actress on Television. Her persona led the writers to develop the character as more complex and volatile. Galactica's executive producer Ron Moore described Sackhoff as having "magnetism"; and producer David Eick said, "We saw this whole other side that was all because of Katee: vulnerability, insecurity, desperation. We started freeing ourselves up to explore the weakness of the character, because we knew Katee could express those things without compromising the character's strength."

Sackhoff said her performance was inspired by Linda Hamilton's portrayal of Sarah Connor in Terminator 2: Judgment Day: "I think that was the one character that I kind of looked to as far as body image and strength. I think I looked to her character and said, 'OK, that's kind of what you need to embody.'" Toward the end of the filming of Battlestar Galactica, Sackhoff began feeling physically weak. Soon after filming wrapped, she was diagnosed with thyroid cancer. After surgery to remove her thyroid, she required no radiation treatments and by February 2009 was in remission.
She made a special appearance in the Futurama episode "Lrrreconcilable Ndndifferences". In the fall of 2010, Sackhoff joined the cast of CSI: Crime Scene Investigation as Detective Reed, a smart investigator who does not do well with sensitivity. In 2011, Sackhoff guest starred in an episode of Workaholics as a homeless drug addict named Rachel. Sackhoff and her Battlestar Galactica co-star Tricia Helfer co-founded the Acting Outlaws, a motorcycle-riding charity with which they have worked to raise awareness and funds for causes including the Gulf Restoration Network, the Humane Society, and the Red Cross amfAR.