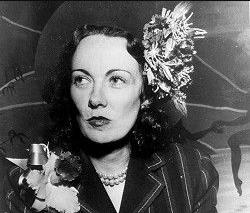 Kay passed away on January 20, 1975 at the age of 66 in Southhampton,New York. Kay's cause of death was cancer.

Kay Summersby (23 November 1908 – 20 January 1975) was a member of the British Mechanised Transport Corps during World War II, who served as chauffeur to Supreme Commander Allied Expeditionary Force Dwight D. Eisenhower, later as his secretary. They were together a great deal until the war ended, when Eisenhower cut his ties and returned to the United States. It is generally agreed that Summersby and Eisenhower became extremely close during the war. Some later writers suggest there were sexual relations between the two, but a number of the people who knew both of them at the time have denied it, as have most of Eisenhower's biographers.