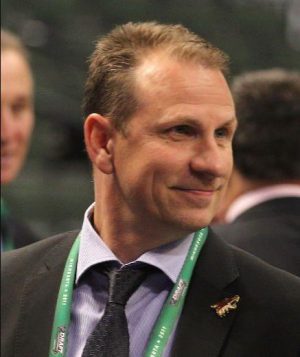 Keith is alive and kicking and is currently 55 years old.
Please ignore rumors and hoaxes.
If you have any unfortunate news that this page should be update with, please let us know using this .

Does Keith Gretzky Have the coronavirus?

Keith Gretzky's father, Walter Gretzky, is still alive and kicking at the age of 83.

Keith Gretzky's mother, Phyllis Hockin, died on December 19, 2005 as she was 64 years old. Her cause of death was lung cancer.

Keith Edward Gretzky is a Canadian hockey scout. He is one of the brothers of ice hockey legend, Wayne Gretzky. Keith was promoted to Director of Amateur Scouting for the Phoenix Coyotes on July 12, 2006, after serving the previous five seasons as an amateur scout for both the Quebec Major Junior Hockey League and Ontario Hockey League. He was drafted by the Buffalo Sabres of the NHL, and though he attended two training camps and played in several pre-season games, he never played a regular-season game for them. He currently serves as Director of Amateur Scouting for the Boston Bruins.