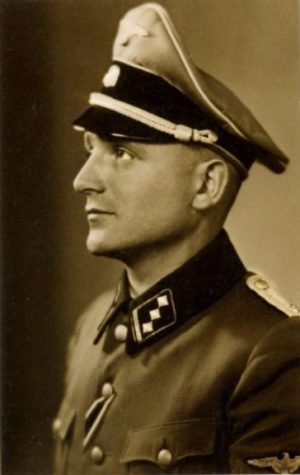 Nikolaus "Klaus" Barbie (25 October 1913 – 23 September 1991) was an SS-Hauptsturmführer (rank equivalent to army captain) and Gestapo member. He was known as the "Butcher of Lyon" for having personally tortured French prisoners of the Gestapo while stationed in Lyon, France. After the war, United States intelligence services employed him for their anti-Marxist efforts and also helped him escape to South America. The Bundesnachrichtendienst, the West German intelligence agency, recruited him, and he may have helped the CIA capture Argentine revolutionary Che Guevara in 1967. Barbie is suspected of having had a hand in the Bolivian coup d'état orchestrated by Luis García Meza Tejada in 1980. After the fall of the dictatorship, Barbie no longer had the protection of the Bolivian government and in 1983 was extradited to France, where he was convicted of crimes against humanity and died in prison of cancer.