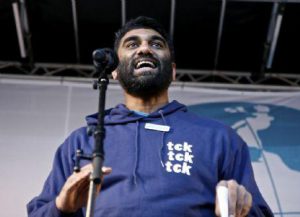 Kumi is alive and kicking and is currently 57 years old.
Please ignore rumors and hoaxes.
If you have any unfortunate news that this page should be update with, please let us know using this .

Kumi Naidoo (born 1965) is a South African human rights activist and the International Executive Director of international environmentalist group Greenpeace. He is the first African to head the organisation. After battling apartheid in South Africa in the 1970s and 1980s through the Helping Hands Youth Organisation, Naidoo led global campaigns to end poverty and protect human rights. He has served as the secretary-general of the Global Call to Action Against Poverty. He was Secretary General of Civicus, an international alliance for citizen participation, from 1998 to 2008. Recently, he has led the Global Call for Climate Action (Tcktcktck.org), which brings together environmental, aid, religious and human rights groups, labour unions, scientists and others and has organised mass demonstrations around climate negotiations.