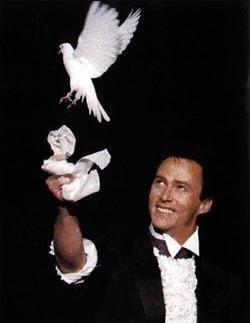 Lance is alive and kicking and is currently 62 years old.
Please ignore rumors and hoaxes.
If you have any unfortunate news that this page should be update with, please let us know using this .

William Lance Burton (born March 10, 1960 in Columbia, Kentucky) is an American stage magician. He performed more than 15,000 shows in Las Vegas for over 5,000,000 people. In 2010 he ended his 31-year career.
Burton first became interested in magic at the age of 5, when he was one of the volunteers at a magic show of Magician Harry Collins during a Christmas party at the Frito-Lay plant where his mother worked. The trick was The Miser's Dream, where Collins "pulled silver dollars out of the sky" and Burton's ears. The young Burton was fascinated, and a neighbor, hearing of his interest, gave him a book, Magic Made Easy, which her own (then-grown) children had used. It contained ten tricks, all of which young Burton quickly learned. His first performances were for neighborhood children, charging them a nickel each.

He performed an initial eight-week trial at the Folies Bergère show in Las Vegas, and then had his contract extended for a record-breaking nine years. In 1982, he competed at the international Fédération Internationale des Sociétés Magiques (FISM) competition in Lausanne, Switzerland, and won the "Grand Prix" prize, (the main event of the FISM competition). He was the youngest person to ever win the main event, and the first American to do so.
For his Top Secret special that first aired on February 24, 1999, at Buffalo Bill's Hotel & Casino in Primm, Nevada, Burton staged an illusion in which he appeared to escape the path of a speeding roller coaster while on the tracks of "The Desperado". The Desperado is one of the tallest and fastest roller coasters in the United States – taking one minute to climb, and 3.5 seconds to descend to where he was on the tracks. He appeared to avoid the coaster by a mere tenth of a second, the trick having apparently gone wrong. After the "narrow escape", he looked at the camera and said "I was stupid...I was really stupid."