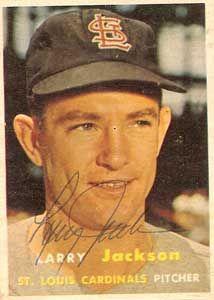 Lawrence Curtis Jackson (June 2, 1931 – August 28, 1990) was an American right-handed pitcher in Major League Baseball who played for the St. Louis Cardinals, Chicago Cubs and Philadelphia Phillies from 1955 to 1968. In 1964 he led the National League with 24 wins for an eighth-place Cubs team, and was runnerup in the Cy Young Award voting; he also led the NL in innings pitched and shutouts once each.