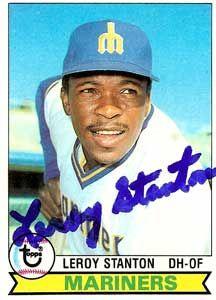 Leroy passed away on March 13, 2019 at the age of 72 in Florence County, South Carolina, USA. Leroy's cause of death was car crash.

Leroy Bobby Stanton (born April 10, 1946), is a former Major League Baseball outfielder. He played all or part of nine seasons in the majors, from 1970 to 1978. He played in the New York Mets, California Angels ant the Seattle Mariners. He also played one season in Japan for the Hanshin Tigers in 1979.
Stanton played two seasons with the Mets. In limited playing time he had five hits in 25 at bats with two RBIs and one double. On December 10, 1971, Stanton was traded by the Mets with Francisco Estrada, Don Rose, and Nolan Ryan to the California Angels for Jim Fregosi, this is considered one of the worst trades the Mets have ever made.

In five season with the Angels Stanton played 594 games with 443 hits, 47 home runs and 242 RBIs. He lost his starting job in right field to Bobby Bonds at the start of the 1976 season after Bonds was acquired from the New York Yankees for Mickey Rivers.