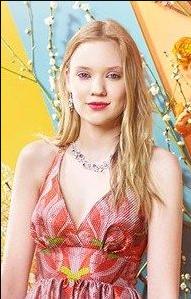 Lola is alive and kicking and is currently 22 years old.
Please ignore rumors and hoaxes.
If you have any unfortunate news that this page should be update with, please let us know using this .

Does Lola Daisy Taylor Have the coronavirus?

Lola Daisy Taylor's father, Roger Taylor, is still alive and kicking at the age of 72. He is English and has had a career as a drummer.

Lola Daisy Taylor's mother, Deborah Leng, is still alive and kicking at the age of 58. She is British and has had a career as a fashion designer, actress.

Lola Daisy May Leng Taylor was born on April 2nd 2000 in London, England and is a photographer and fashion model, the youngest daughter of Queen drummer Roger Taylor and model/actress Deborah Leng.
Her first modeling shot was on the February 2015 issue of i-D magazine, the Music Issue. On July 2015 appeared along with her older sisters Rory Eleanor Taylor and Tigerlily Taylor at the Tatler's supplement "Watches and Jewellery". In early 2016 she modeled for Delada. Her first international modeling work as for Italian Vogue's June 2016 issue, appearing with her older sister Tigerlily.

On March 23rd 2017 she announced at her Instagram profile that she was a music photographer and created a website.
She has two older half-siblings from her father's first marriage, actor Felix Taylor and doctor Rory Eleanor Taylor. She also has two older siblings, drummer Rufus Taylor and model Tigerlily Taylor. She studied at Bedales School.