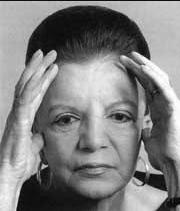 Lygia Clark (Belo Horizonte, October 23, 1920 – Rio de Janeiro, April 25, 1988) was a Brazilian artist best known for her painting and installation work. She was often associated with the Brazilian Constructivist movements of the mid-20th century and the Tropicalia movement. Even with the changes in how she approached her artwork, she did not stray far from her Constructivist roots. Along with Brazilian artists Amilcar de Castro, Franz Weissmann, Lygia Pape and poet Ferreira Gullar, Clark co-founded the Neo-Concrete movement. The Neo-Concretists believed that art ought to be subjective and organic. Throughout her career trajectory, Clark discovered ways for museum goers (who would later be referred to as "participants") to interact with her art works. She sought to redefine the relationship between art and society. Clark's works dealt with inner life and feelings.