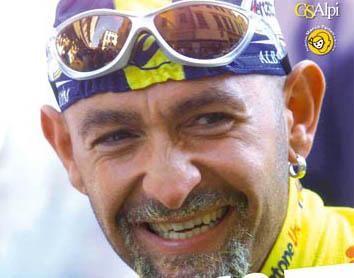 Marco passed away on February 14, 2004 at the age of 34 in Rimini, Italy. Marco's cause of death was drug overdose.

Marco Pantani (13 January 1970 – 14 February 2004) was an Italian road racing cyclist, widely considered one of the best climbers of his era in professional road bicycle racing. He won both the Tour de France and the Giro d'Italia in 1998, being the sixth Italian after Ottavio Bottecchia, Gino Bartali, Fausto Coppi, Felice Gimondi and Gastone Nencini to win the Tour de France. He is the last cyclist to win the Giro and the Tour in the same year.