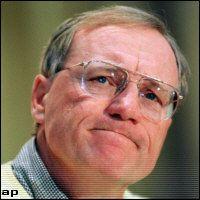 Marty is alive and kicking and is currently 78 years old.
Please ignore rumors and hoaxes.
If you have any unfortunate news that this page should be update with, please let us know using this .

Does Marty Schottenheimer Have the coronavirus?

Martin Edward "Marty" Schottenheimer (/ˈʃɒtənhaɪmər/; born September 23, 1943) is a former professional American football player and coach. Over his career, he has served as head coach of the Cleveland Browns, Kansas City Chiefs, Washington Redskins, and San Diego Chargers. He has the most wins of any NFL coach since 1966 to never coach a team in a Super Bowl (which was first held in that year). He was fired from his head coaching position with the San Diego Chargers in 2007, after leading the Chargers to a 14–2 record but a disappointing second round loss. He later emerged as the head coach of the Virginia Destroyers of the United Football League, where he would win his only championship as a coach in his lone season there.
Schottenheimer was born in Canonsburg, Pennsylvania. He attended high school at Fort Cherry High School in McDonald, Pennsylvania. After attending the University of Pittsburgh, Schottenheimer, a linebacker, was selected in the fourth round of the 1965 NFL Draft by the Baltimore Colts and in the seventh round of the 1965 American Football League draft by the Buffalo Bills. He signed with the Bills and spent the next four (1965, 1966, 1967, and 1968) seasons with Buffalo, including the Bills' 1965 AFL Championship season, when he was selected to the AFL All-Star Team. Schottenheimer was still with the team during the 1969 preseason and intercepted two passes in a game against the Houston Oilers.

Schottenheimer has been married to his wife, Pat, since 1968. They live on Lake Norman in North Carolina. They have two children, a daughter, Kristen and a son, Brian, who is the Offensive coordinator for the Seattle Seahawks. Marty's younger brother Kurt was also a coach in the NFL.
In 2011, Schottenheimer was diagnosed with Alzheimer's disease. By the time the diagnosis was announced publicly in 2016, it had progressed slowly and he still maintained much of his memory and function, and he was about to begin experimental treatment to slow the progression of the disease even further.