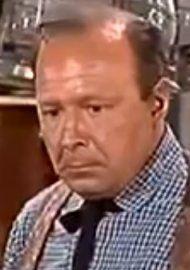 The veteran stage actor made his feature film debut in Close-Up (1948), shot in New York City. Seven years later, when the national company of "Tea and Sympathy" (with which he was touring) closed on the West Coast, he remained there, making his Hollywood movie debut in The Creature Walks Among Us (1956), as one of the scientists in the employ of Jeff Morrow, an actor Manson knew from his summer stock days.