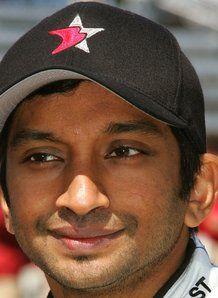 Narain is alive and kicking and is currently 45 years old.
Please ignore rumors and hoaxes.
If you have any unfortunate news that this page should be update with, please let us know using this .

Kumar Ram Narain Karthikeyan (born 14 January 1977, in Coimbatore) is the first Formula One motor racing driver from India. He has previously competed in A1GP, and the Le Mans Series. He made his Formula One debut in 2005 with the Jordan team, and was a Williams F1 test driver in 2006 and 2007. Like several other former F1 drivers, Karthikeyan moved to stock car racing and drove the #60 Safe Auto Insurance Company Toyota Tundra for Wyler Racing in the 2010 NASCAR Camping World Truck Series.
In 2011 he returned to F1 with the HRT team, continued with the team in 2012 and was expected to drive for them in the 2013 season as well. However, HRT was not included in the FIA's 2013 entry list, and thus Karthikeyan was left without a drive. In 2013, Karthikeyan raced in the Auto GP series, securing 5 wins and 4 pole positions with Super Nova Racing. For 2014, Karthikeyan has signed up with Team Impul, to race in the Japanese Super Formula series.

Karthikeyan was born in Coimbatore, Tamil Nadu to Mr.Karthikeyan and Mrs Sheela. The family runs the famous PSG institutions. Karthikeyan did his schooling at Stanes Anglo Indian Higher Secondary School in Coimbatore. Karthikeyan's interest in motorsport began at an early age, as his father was a former Indian national rally champion winning South India Rally seven times. India's most famous racing driver until Karthikeyan came along.
With the ambition of becoming India's first Formula One driver, Karthikeyan finished on the podium in his first ever race, at Sriperumpudur in a Formula Maruti (a.k.a.FISSME). He then went on to the Elf Winfield Racing School in France, showing his talent by becoming a semi-finalist in the Pilote Elf Competition for Formula Renault cars in 1992. He returned to India to race in Formula Maruti for the 1993 season, and in the same year, he also competed in the Formula Vauxhall Junior championship in Great Britain. This gave him valuable experience in European racing, and he was keen to return for the following year.