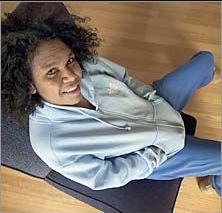 Ningali Lawford passed away on August 11, 2019 at the age of 52 in Edinburgh, United Kingdom.

Ningali Josie Lawford (born 1967) is an Australian actress. She is known for her roles in the films Rabbit-Proof Fence (2002), Bran Nue Dae (2009), and Last Cab to Darwin (2015), for which she was nominated for the AACTA Award for Best Actress in a Leading Role.
In 1994, Lawford premiered her one-woman show, Ningali, in Perth. It was co-written by stage directors Robyn Archer and Angela Chaplin, whom she had met the previous year. The show toured internationally and won the Fringe First Award for Best New Production at the 1995 Edinburgh Festival Fringe and the 1996 Green Room Award for Best Actress in a One Woman Show.

In 2000, the satirical comedy Black and Tran premiered at the Melbourne Comedy Festival. It was a collaboration between Lawford and Vietnamese comedian Hung Le. It addressed "the issue of racial discrimination by ridiculing the stereotypes of Aboriginal and Vietnamese cultures".
She died after falling ill while on tour with a production at the Edinburgh International Festival.