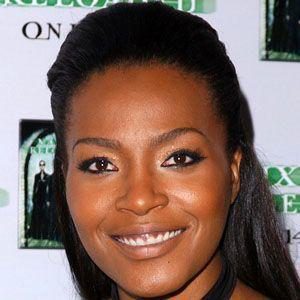 Nona is alive and kicking and is currently 47 years old.
Please ignore rumors and hoaxes.
If you have any unfortunate news that this page should be update with, please let us know using this .

Does Nona Gaye Have the coronavirus?

Nona Gaye's father, Marvin Gaye, died on April 1, 1984 as he was 44 years old. His cause of death was murdered - shot and killed by his father.

Nona Gaye's mother, Janis Hunter, is still alive and kicking at the age of 66. She is American and has had a career as a singer, actress.

Nona Marvisa Gaye is an American singer, former fashion model, and actress. The daughter of soul music legend Marvin Gaye and granddaughter of jazz great Slim Gaillard, she began her career as a vocalist in the early 1990s. As an actress, she is best known for her portrayal of Zee in the 2003 science fiction films The Matrix Reloaded and The Matrix Revolutions.
Gaye appeared alongside other artists to re-record and release her father's single "What's Going On" for AIDS research in 2001. That same year, she began her acting career, debuting in Michael Mann's Ali. In 2002, she replaced Aaliyah, who died in a plane crash shortly after the filming of The Matrix sequels began, for the role of Zee, the wife of Harold Perrineau's character Link.

At one point, she worked with R. Kelly on two as-yet-released singles, "Work It" & "Just Because", which interpolates the Gap Band's "Oops Upside Your Head". In July 2006, Gaye was added to the cast of Law & Order: Criminal Intent as a replacement for Courtney B. Vance as the new Assistant District Attorney. However, just as the series began production for its sixth season, she left the show, citing "creative differences". Gaye was replaced by Theresa Randle, who left after filming only two episodes.
In 2008, three previously recorded tracks by Gaye appeared for sale at AmieStreet.com in EP form. The EP was entitled Language of Love and contains the tracks "Quarter To Three" and "Midas Lover", along with the title track.