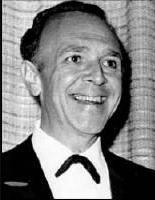 Norman passed away on November 1, 1984 at the age of 74 in Los Angeles, California. Norman's cause of death was stroke.

Norman Krasna (November 7, 1909 – November 1, 1984) was an American screenwriter, playwright, producer, and film director. He is best known for penning screwball comedies which centred on a case of mistaken identity. Krasna also directed three films during a forty-year career in Hollywood. He garnered four Academy Award screenwriting nominations, winning once for 1943's Princess O'Rourke, a film he also directed.