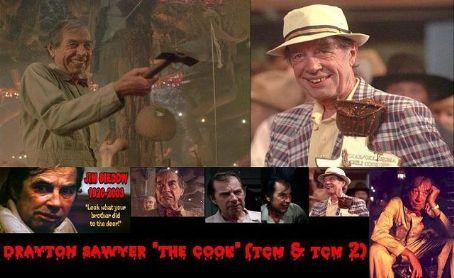 Drayton "The Cook" Sawyer, portrayed by Jim Siedow and Bill Mosley, appears in The Texas Chain Saw Massacre, The Texas Chainsaw Massacre 2 and future film The Texas Chainsaw Massacre 3D. In all of his appearances, Drayton is an antagonist. He is apparently the older brother to Leatherface and the rest of the family. A mentally unstable and murderous cannibal, Drayton, along with his family of fellow cannibals and serial killers, lives in the backwoods of Texas, preying upon travelers, whom he and his relatives capture and devour, selling some of their meat to unwary people in chili at his restaurant/gas station. He also gets mad at Leatherface for ruining the house. Drayton's name wasn't mentioned until the second film, the first simply referred to him as "the Cook" and "the Old Man". Like his brother Nubbins, Drayton seems to be suffering from a mental disorder, probably schizophrenia or multiple personalities, as he is seen enjoying the torture of his family's victims, but at one point he flips personalities and is disgusted by the torment as his more empathic side surfaces. His personality disorder has been discussed by Tobe Hooper several times, like on the audio commentary for Texas Chainsaw Massacre 2. Drayton often bickers with the rest of his brothers and is abusive towards them. Although Drayton appears to be the head of the household, his brothers often mock and antagonize him and his authority. Drayton Sawyer makes his debut appearance in The Texas Chain Saw Massacre, in which he first appears as the middle-aged proprietor of the Last Chance Gas Station, a Gulf gas station and barbecue shop (with an unnamed car door window washer as an employee), where a group of teenagers stop while passing through the area. Drayton's malevolent nature is revealed later in the film, when he beats Sally Hardesty (Marilyn Burns) unconscious and captures her after she approaches him seeking help when her friends disappear and her brother Franklin (Paul A. Partain) gets killed by Leatherface. Having been chased by Leatherface previously, she is highly hysterical after her shocking experience. Taking Sally to his home, Drayton torments her alongside his siblings, Leatherface (Gunnar Hansen) and Nubbins the Hitchhiker (Edwin Neal), before deciding to let the family patriarch, Grandpa (John Dugan), kill her. When Grandpa proves too decrepit to kill Sally with a hammer, Drayton, the Hitchhiker and Leatherface attempt to aid him, but only succeed in losing grasp on Sally, who flees out a window, he is the only one of the three brothers who does not pursue her choosing instead to stay behind with Grandpa. The more humane side of Drayton is revealed when he states "I just can't take no pleasure in killing" after Hitchhiker accuses him of doing nothing but cooking for the family while he and Leatherface do all the killing, which explains why Drayton beat and captured Sally rather than killing her. In The Texas Chainsaw Massacre 2, Drayton reappears, now he and his family are living in an abandoned amusement park in Dallas (called Texas Battle Land), due to the intense police investigation sparked by the events of the first film, with what remains of his family, Leatherface (Bill Johnson), Chop Top (Bill Moseley) and Grandpa (Ken Evert). Now a two time award-winning chili cook selling his meat at a Chilli Cook-off (dismissing the bones and teeth as peppercorns), Drayton appears far more unhinged than in the previous film, happily joining in on his family's murderous frenzies, which previously disturbed him somewhat. In public, Drayton displays a very happy people person personality he did the same in the first film in order to lure the young adults to their deaths and most likely others but his mental disease shows up once he's back with his family as an angry man. Drayton presumably dies, off-screen, at the end of the film, when, during the fight between Leatherface and Lieutenant "Lefty" Enright (Dennis Hopper), he is accidentally struck by Leatherface and the hand grenade he is holding (planning to commit suicide and destroy the hideout with) explodes prematurely. In this film, Drayton also rambles about the plight of the small business man and how crooks, politicians and movie stars don't pay taxes, yet he and his poor family have to. The only reference of Drayton made in The Texas Chainsaw Massacre 3 was when Sawyer brother Tinker gives a large chromed chainsaw he crafted to Leatherface as a gift, on the saw's blade he engraved a quote of Drayton's from the second film ("The saw is family"). Drayton was originally set to be the grandfather in the Texas Chainsaw Massacre 4, but when Jim Siedow turned down the role, director Kim Henkel replaced Drayton as the grandfather and turned the character into Grandpa from the earlier films, though the character is still referred to as "Grandfather". In Topps