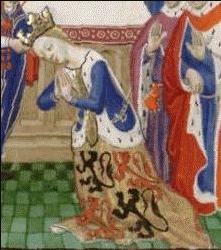 Philippa of Hainault Birthday and Date of Death

Is Philippa of Hainault's father, William I, dead or alive?

Is Philippa of Hainault's mother, Joan of Valois, dead or alive?

Joan of Valois's information is not available now.

Philippa of Hainaut was Queen of England as the wife of King Edward III. Edward, Duke of Guyenne, her future husband, promised in 1326 to marry her within the following two years. She was married to Edward, first by proxy, when Edward dispatched the Bishop of Coventry "to marry her in his name" in Valenciennes in October 1327. The marriage was celebrated formally in York Minster on 24 January 1328, some months after Edward's accession to the throne of England. In August 1328, he also fixed his wife's dowry.