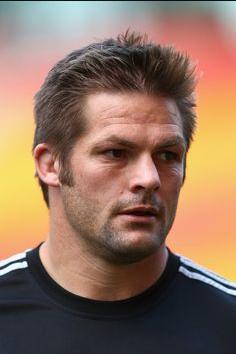 Richie is alive and kicking and is currently 41 years old.
Please ignore rumors and hoaxes.
If you have any unfortunate news that this page should be update with, please let us know using this .

Richard Hugh "Richie" McCaw (born 31 December 1980) is a New Zealand rugby union player, the current test captain of the All Blacks – the country's national team.
He is the most capped test rugby player of all time. He predominantly plays in the openside flanker position for the New Zealand, Crusaders and Canterbury teams, but had also played as blindside flanker and no. 8. McCaw is considered by many as the greatest openside flanker of all time, with his ability to anticipate play and adaptability to referee's law interpretations two of his key attributes. He was raised in Kurow in rural North Otago, before moving to Dunedin in 1994 to board at Otago Boys' High School.

In 1999 he moved to Christchurch to study at Lincoln University and was selected in the national under-19 team. The following year he played for the Under-21s and Canterbury in the National Provincial Championship (NPC), before debuting in 2001 for the Crusaders in Super Rugby.
In January 2013 it was reported that he had been seeing hockey player Gemma Flynn for the past six months. McCaw announced his engagement to Flynn in January 2016. They married on 14 January 2017.
In 2010, McCaw and Dan Carter were on a NZ$750,000 a year contract that saw them through to the end of the 2011 Rugby World Cup, making them the highest paid rugby players in New Zealand at the time. This contract would still have applied if they had not been selected for the World Cup squad.