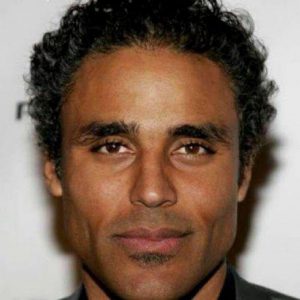 Rick is alive and kicking and is currently 53 years old.
Please ignore rumors and hoaxes.
If you have any unfortunate news that this page should be update with, please let us know using this .

Does Rick Fox Have the coronavirus?

Ulrich Alexander "Rick" Fox (born July 24, 1969) is a Canadian film and television actor and retired professional basketball player who last played for the NBA's Los Angeles Lakers in 2004.
Fox was born in Toronto, the son of Dianne Gerace, who was an Olympic high jumper and women's pentathlete, and Ulrich Fox. His father is Bahamian and his mother is Canadian of Italian and Scottish descent. Fox's family moved to his father's native Bahamas when Fox was young. He attended Kingsway Academy in Nassau, where he was a member of the high school's basketball team, the "Saints". Fox also played high school basketball in Warsaw, Indiana. After two seasons (1984–1986) at Warsaw, Fox was projected to have a very successful senior season. Just prior to his senior season, the Indiana High School Athletic Association (IHSAA) ruled that he had no more high school eligibility left (due to completing eight semesters between the Bahamas and Indiana) and was not allowed to participate in any further IHSAA games. Despite not playing his senior season, Fox was voted onto the Indiana All-Star team in 1987.

Fox has a son Kyle (born 1993) with Kari Hillsman, a woman he dated while playing basketball for the Boston Celtics. Fox was also married to actress/singer Vanessa Williams. After eloping in summer 1999 in the Caribbean, they had another ceremony in September 1999 in New York City. They had a daughter in May 2000. In August 2004, Fox filed for divorce from Williams. Fox and Williams' split however was amicable enough for the two of them to work onscreen together several years later on the television show Ugly Betty. Fox and actress Eliza Dushku dated from October 2009 to June 2014. He has a younger sister, Jeanene Fox who is a highly successful European model and actress.
Rick Fox was not among those tragically killed in a helicopter crash in Calabasas, California, on January 26, 2020. Several other sports journalists also confirmed that reports of the former NBA player’s death at 50 were false.