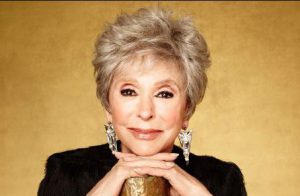 Rosita is alive and kicking and is currently 90 years old.
Please ignore rumors and hoaxes.
If you have any unfortunate news that this page should be update with, please let us know using this .

Does Rita Moreno Have the coronavirus?

Rita Dolores Moreno is a Puerto Rican actress and singer. She is one of the twelve performers to have won all four major annual American entertainment awards, which include an Oscar, an Emmy, a Grammy and a Tony, and was the second Puerto Rican to win an Oscar.
Moreno acted steadily in films throughout the 1950s, usually in small roles, including in The Toast of New Orleans (1950) and Singin' in the Rain (1952), in which she played the starlet "Zelda Zanders". In March 1954, Moreno was featured on the cover of Life Magazine with the caption "Rita Moreno: An Actress's Catalog of Sex and Innocence".

Moreno was romantically involved with actor Marlon Brando. It was a tumultuous relationship due to his infidelity. When Moreno became pregnant, Brando arranged for an abortion. After a botched abortion, Moreno tried to commit suicide by overdosing on his sleeping pills.
In interviews with Good Day LA (2013) and Wendy Williams (June 28, 2018), as well as her biography, Moreno stated that Elvis Presley was not a good lover. They dated for quite some time, but whenever the opportunity presented itself to take the relationship to another level, she said Presley backed off, "like a baby brother who couldn’t make interesting conversation."
On June 18, 1965, Moreno married Leonard Gordon, a cardiologist who was also her manager. He died on June 30, 2010. They have one daughter, Fernanda Luisa Fisher, and two grandsons, Justin and Cameron Fisher. Moreno once considered leaving her husband but could not because she did not want to break up the family.