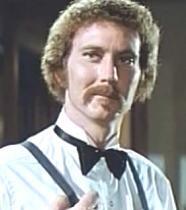 Robert passed away on April 14, 1993 at the age of 52 in Los Angeles, California, USA. Robert's cause of death was heart attack.

Amongst martial arts film fans, Robert Baker's claim to fame was portraying the Russian strong man / martial artist named "Petrov" in the cult Bruce Lee movie Fist of Fury (1972) (aka "The Chinese Connection" aka "Fist of Fury"). Baker was a student in Lee's martial art fighting style (Jeet Kune Do) and was recruited by Bruce, to play the role of the sinister Russian due to his height and "tough guy" appearance.
The key fight sequence between Lee and Baker is a mixture of punishing action and dry humor, as at one point Lee bites Baker on his leg to escape an arm lock (and then Lee wipes his mouth just like he was simply finishing a meal), plus Lee boxes with Baker, jabbing him repeatedly in the face whilst wearing a cheeky grin! The fight comes to a dramatic conclusion as Lee side kicks Baker in the head, knocking him senseless, and then Lee delivers a lethal karate chop to Baker's windpipe, terminating his bigger opponent.

Baker also had a minor role as a thug in Lee's next film The Way of the Dragon (1972) (aka "Way of the Dragon" aka "Return of the Dragon"), and he has additionally appeared in several documentaries regarding the life and film career of Bruce Lee.