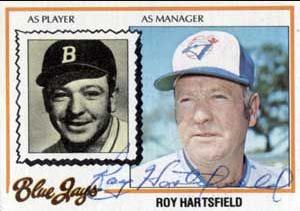 Roy Thomas Hartsfield (October 25, 1925 – January 15, 2011) was a second baseman and manager in Major League Baseball; his MLB playing and managing careers each lasted three years. Hartsfield played his entire major-league career with the Boston Braves (now the Atlanta Braves) from 1950 to 1952. He was then traded to the Brooklyn Dodgers for outfielder Andy Pafko. Hartsfield spent the next 19 years in the Dodgers organization as a minor league player and manager and major league coach. In the latter role, he worked under Los Angeles skipper Walter Alston for three seasons.