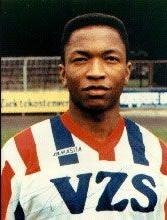 Ruben Kogeldans (4 January 1967 in Venlo – 7 June 1989 in Paramaribo) was a Dutch-Surinamese footballer. During his career he served VVV-Venlo and Willem II Tilburg. He died at the age of 22, when on 7 June 1989 he was killed in the Surinam Airways Flight PY764 air crash in Paramaribo. His father was also a footballer and was played for the Suriname national football team. One of his passions off the pitch were the drums.