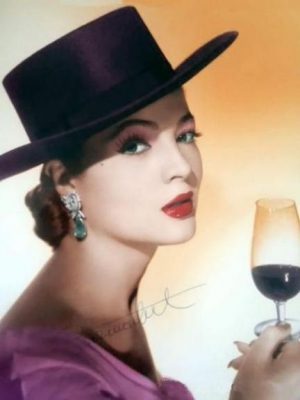 Sara passed away on April 8, 2013 at the age of 85 in Madrid, Madrid Spain. Sara's cause of death was congestive heart failure.

María Antonia Abad Fernández (10 March 1928 – 8 April 2013) known professionally as Sara Montiel (also Sarita Montiel or Saritísima) was a Spanish singer and actress.Montiel was born in Campo de Criptana in the region of Castile–La Mancha in 1928 as María Antonia Abad (complete name María Antonia Alejandra Vicenta Elpidia Isidora Abad Fernández). She worked in Europe, Latin America and United States. Her films The Last Torch Song and The Violet Seller netted the highest gross revenues ever recorded for films made in the Spanish-speaking movie industry during the 1950s/60s. Montiel's film Variety was banned in Beijing in 1973. She played the role of Antonia, the niece of Don Quixote, in the 1947 Spanish film version of Cervantes's great novel.She was portrayed in the Pedro Almodóvar film Bad Education by a male actor in drag (Gael García Bernal) as the cross-dressing character Zahara, and a film clip from one of her movies was used, as well.Acting careerMontiel started in movies at 15 in her native Spain where she filmed her first movie playing an Islamic princess in the 1948 film Madness for Love, released in the U.S. as The Mad Queen. Later worked in Mexico, starring in a dozen films in less than five years. Hollywood came calling afterwards, and she was introduced to United States moviegoers in the film Vera Cruz (1954) co-starring Gary Cooper and Burt Lancaster, and directed by Robert Aldrich. She was offered the standard seven-year contract at Columbia Pictures, which she refused, afraid of Hollywood's typecasting policies for Hispanics. Instead she freelanced at Warner Bros. with Mario Lanza and Joan Fontaine in Serenade (1956), directed by Anthony Mann, and at RKO in Samuel Fuller's Run of the Arrow (1957), opposite Rod Steiger and Charles Bronson.From The Last Torch Song (1957) on she combined filming, recording songs in five languages and performing live. Almost all of her films earned high box office results. Among the films during the 1960s and early 1970s were The Violet Seller (1958), Carmen. la de Ronda (1959), Mi Último Tango (1960), Pecado de Amor (1961), La Bella Lola (a 1962 version of Camille), Casablanca, Nid d'espions (1963), Samba (1964), La Femme Perdue (1966), Tuset Street (1967), Esa Mujer (1969), Varietes (1971) and others. By then she had become dissatisfied with the movie industry when producers started offering her erotic roles in comedy films. In 1974 Montiel announced her retirement from movies but continued performing live, recording and starring on her own variety television shows in Spain.In November 2009, Alaska from the Spanish pop group Fangoria invited Montiel to record a track sharing vocals with her for the re-release of the band's album Absolutamente. They recorded the title track "Absolutamente" as a duet. The music video for the song was released in early 2010. She had no plans to retire, and, in May 2011, after almost 40 years without making a movie, she accepted to perform in a feature film directed by Óscar Parra de Carrizosa. The film title is Abrázame and was shot on location in La Mancha.Personal informationMontiel was born María Antonia Alejandra Abad Fernández in 1928 in Campo de Criptana, Ciudad Real, Spain. She entered films after winning a beauty and talent contest at age 15. In her first movie she was credited as "María Alejandra" a shortened version of her real name. For her next film she changed her name to Sara, after her grandmother, and Montiel after the Montiel fields in the Castile–La Mancha region of her birth. She has been married four timesSpouseAnthony Mann (American actor, film director); 1957-1963 (divorced)José Vicente Ramírez Olalla (attorney); 1964-1978 (annulled)José Tous Barberán (attorney, journalist); 1979-1992 (Tous's death); this union produced two adopted children: Thais (born 1979) and José Zeus (born 1983)Antonio Hernández (Cuban videotape operator); 2002-2005 (divorced)MemoirsIn 2000, Montiel published her autobiography Memories: To Live Is A Pleasure, an instant best seller with ten editions to date. A sequel Sara and Sex followed in 2003. In these books Montiel revealed other relationships in her past including one-night stands with writer Ernest Hemingway as well as actor James Dean. She also claimed a long-term affair in the 1940s with playwright Miguel Mihura and mentioned that science wizard Severo Ochoa, a Nobel Prize winner, was the true love of her life.Montiel died in 2013 at her home in Madrid, Madrid Spain at the age of 85 from congestive heart failure.