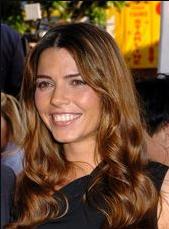 Sibi is alive and kicking and is currently 52 years old.
Please ignore rumors and hoaxes.
If you have any unfortunate news that this page should be update with, please let us know using this .

Sandra Blazic (born April 14, 1970 in Chigago, Illinois, USA) is a former model, one time actress, and movie director, of Serbian ancestry. Sandra prefers being called "Sibi". She grew up in Bosnia, where she had a painful childhood, she then emigrated to the USA. She has a B.S. in business, from The University of Southern California. She worked as assistant to Winona Ryder as well as appearing as a model in Kevyn Aucoin`s make-up book, Face Forward. She married Christian Bale in Las Vegas, after meeting at a BBQ. They then moved to Edinburgh, Scotland, and then in 2002, they bought a house in Los Angeles, where they currently live with their child, Emmaline, and rescued dogs, Mojo and Ramone. Christian Bale served jail time, while in London for the Dark Knight premiere. Bale`s mother and sister reported him for verbally assaulting them, and the fight turned more physical due to mother Jenny insulting Ms. Blazic.