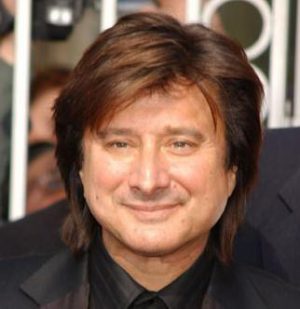 Steve is alive and kicking and is currently 73 years old.
Please ignore rumors and hoaxes.
If you have any unfortunate news that this page should be update with, please let us know using this .

Does Steve Perry Have the coronavirus?

Stephen Ray "Steve" Perry is an American singer, songwriter, record producer, and musician, best known as the lead singer of the rock band Journey during their most commercially successful periods from 1977 to 1987 and again from 1995 to 1998. Perry had a successful solo career between the mid 1980s and mid 1990s.
Perry is renowned for his tenor vocal range, which spans from F#2 to A5. Perry's voice has been described as a "high 'tenor altino' [with] a tone somewhere between Sam Cooke and Aretha Franklin." He has been dubbed "The Voice", a moniker originally coined by former chart peer Jon Bon Jovi. Queen guitarist Brian May said: "Perry is a truly luminous singer, in my opinion—a voice in a million."

Record executive, producer, and former American Idol judge and Journey session musician Randy Jackson has described Perry's voice as "the golden voice," adding that aside from Robert Plant, "there's no singer in rock that even came close to Steve Perry. The power, the range, the tone—he created his own style. He mixed a little Motown, a little Everly Brothers, a little Zeppelin." Journey guitarist Neal Schon likened Perry's ability to that of Aretha Franklin, and agreed with Fozzy vocalist Chris Jericho's assertion that Perry "might be the greatest male singer of all time".
In 1984, following the release of Frontiers and the tour supporting this effort, Perry released his first solo album, Street Talk (the album's title was derived from the original name of Perry's earlier band Alien Project). The record sold more than 2 million units, scoring the hit singles No. 3 "Oh Sherrie", written for his then-girlfriend Sherrie Swafford, and No. 18 "Foolish Heart". The music video for "Oh Sherrie" saw heavy rotation on MTV. "She's Mine" and "Strung Out" were also released as singles from this project, which featured former Alien Project drummer Craig Krampf on a few tracks, guitarist Michael Landau, and future American Idol judge Randy Jackson on bass, among others.