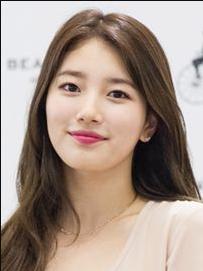 Suzy is alive and kicking and is currently 27 years old.
Please ignore rumors and hoaxes.
If you have any unfortunate news that this page should be update with, please let us know using this .

Bae Su-ji (Hangul: 배수지; born October 10, 1994), better known by the mononym Suzy or Suzy Bae, is a South Korean singer and actress. She is a member of the girl group miss A under JYP Entertainment and is best known for her roles in the musical drama Dream High (2011), romantic film Architecture 101 (2012), historical-fantasy Gu Family Book (2013) and melodrama Uncontrollably Fond (2016).
In October 2010, Suzy became the fixed host for MBC Show! Music Core alongside Minho and Onew, both members of Shinee, and Jiyeon, of T-ara. Suzy later hosted other events such as the Seoul Music Awards, Golden Disc Awards, and Mnet 20's Choice Awards where she won an award under the category "Hot New Star of 2011". Since then, Suzy continues to host many events from music shows to major award ceremonies.

Apart from her group activities, Suzy also ventured into acting. She made her acting debut in the music teen drama Dream High, which aired on KBS from January 3 to February 28. Suzy also released an OST for the drama, titled "Winter Child". The drama was a local success, earning high viewership ratings during its two-month run; and also gained popularity in other countries. At the KBS Drama Awards, Suzy won the Best New Actress award as well as Best Couple award with co-star Kim Soo-hyun. Suzy also became a cast member in KBS TV reality show Invincible Youth 2. The show began filming its first episode on October 19 and aired on November 11.
In 2013, she starred in the historical fusion drama Gu Family Book alongside Lee Seung-gi. She received acting recognition at the MBC Drama Awards, winning the Top Excellence award and at the Seoul International Drama Awards, winning the Outstanding Actress award. She also featured on the variety show Healing Camp, becoming the youngest guest on the show.