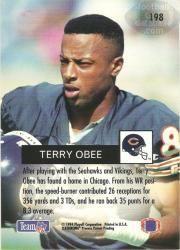 Terry is alive and kicking and is currently 54 years old.
Please ignore rumors and hoaxes.
If you have any unfortunate news that this page should be update with, please let us know using this .

Terry Obee is a former professional American football player who played wide receiver and kickoff returner for three seasons for the Chicago Bears and Minnesota Vikings.